ACHS is an accredited member of the Distance Education and Training Council (DETC), the US Department of Education and Council on Higher Education Accreditation recognized agency that accredits distance learning institutions.

Each year, ACHS nominates an Outstanding Graduate and a Famous Alumni to represent the College at the DETC annual conference. This year's conference was held in April in Tucson, Arizona. ACHS graduates had an opportunity to share their experience as an ACHS student as well as their successes since graduation.

ACHS President Dorene Petersen interviewed each graduate. Both Mark Dykowski and Eric Rodgriguez had great tips to share with students about their experience with ACHS and their success since graduation. Below are links to MP3 files that are interviews recorded during the DETC Conference:

Eric Rodriguez was awarded a 2007 Outstanding Graduate Award. Mark Dykowski was awarded a 2007 Famous Alumni Award. Dorene Petersen, the President of the ACHS, was there to see them receive their awards and interview them about their accomplishments. 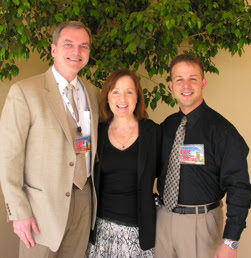 Mr. Eric Rodriguez was at the end of serving a 10-year tenure with the U.S. Air Force as an Electronics major, when he decided to change careers. As a student who came from a traditional college background, he was skeptical of finding comparable distance education. He enrolled with the Australasian College of Health Sciences (ACHS), and after a few months, he was not only impressed with the inherent attributes of distance education, but he also was amazed at the rate of information he retained.

Eric graduated with Honors from ACHS's Master Herbalist program in August 2006. Eric found ACHS while searching for a quality education that would fit his lifestyle.

Since becoming a graduate of ACHS, Eric has started an apprenticeship with an established N.D. in preparation for opening his own private practice, Progressive Natural Health Solutions, LLC. Eric also has been asked by Edison State Community College to provide a 30-minute lecture on complementary medicine.

"Being able to command and control my own environment brought out the best in my learning abilities. The staff of ACHS was among the best in the business and not only guided me through my studies, but inspired me to pursue my chosen profession." - Eric Rodriguez, Master Herbalist

Dr. Mark Dykowski is an allopathic physician and OBGYN in Michigan. He graduated with Honors from the Australasian College of Health Sciences Master Herbalist (M.H.) program in February 2006. Dr. Dykowski developed an interest in complementary and alternative medicine as a way of meeting his patients' and family's health and wellness needs and found the ACHS Master Herbalist course to give him training to incorporate an integrative approach to his practice of medicine and to promote health and wellness.

Dr. Dykowski served as a Major in the United States Air Force Medical Corps from 1987 to 1990 and was awarded the Meritorious Service Award.

Dr. Dykowski has been listed as one of his area's "Top Doctors" in the October 2006 issue of Metropolitan Detroit's HOUR Magazine. He has been asked to speak at a women's health day on Complementary and Alternative Medicine and to his hospital's Ovarian and Breast Cancer Survivors groups. The local TV doctor has also asked his advice on stories relating to the use of herbal therapies.

"The greatest thrill has been the look on patients' faces as they describe a supplement or herb they are using and they are shocked to know that their provider not only has heard about it, but can actually educate them about the product! This small door of insight often opens the door to greater patient comfort in discussing other areas of health concern or therapy."
- Mark Dykowski, Master Herbalist, OBGYN