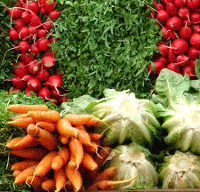 By Nigel Hunt and Brad Dorfman

LONDON/CHICAGO (Reuters) -- As recession drives consumers to cut costs, their commitment to organic food has been tested with sales growth slowing -- but so far, sales are not falling. How green are our wallets?

Grown without the use of synthetic fertilisers and pesticides, organic food has been booming, driven by claims it is healthier, tastes better and its production does less damage to the environment than conventional agriculture.

The global market for organic food and beverages was worth $22.75 billion (16 billion pounds) in 2007, after more than doubling in five years, according to market research firm Euromonitor International. The United States accounted for about 45 percent of that total.

With economies in crisis, the trend is slowing in the United States, Britain, France and Europe's most important market for organic food, Germany. So far, Britain is the market tipped for a fall as shrinking incomes force the newly green to save money.

Typical growth rates of 20 to 30 percent for organic food sales in the United States eased in the second half of 2008 as middle- and upper-income families felt the strain of layoffs and declining investment portfolios, said Tom Pirovano, director of industry insights at market research firm The Nielsen Co.

Sales in December were up 5.6 percent, year on year, against a 25.6 percent rise a year earlier.

Even though growth is slowing, Pirovano noted that most people who purchased organic foods were very committed.

"I'm not convinced that we are going to see big declines in organics any time soon," he said.

Nielsen data measures packaged foods with bar codes at many retail outlets. Discount retailer Wal-Mart does not participate in the market research.

Late on a Friday in London's South Kensington, shoppers at the Whole Foods store owned by the U.S.-based organic and natural foods supermarket were sparse.

"I always try to buy organic if I can. But I definitely have cut back," said Mary Boynton, 20, adding that she buys more organic produce from supermarkets which have a cheaper offer.

Shares in Whole Foods Market Inc. have been on a broadly weakening trend since 2006 and trades around $11, down from nearly $80 in late 2005.

But Michael Besancon of Whole Foods, which claims the world-leading slot in the sector with more than 270 stores in North America and Britain, says there is a hard core.

"It is not a fad," said Besancon, the company's senior global vice-president of purchasing, distribution and marketing. "I'm 62 and my mother is still waiting for me to shave my beard and stop eating organic food. That isn't going to happen."

Ronnie Cummins, national director of the Organic Consumers Association, said occasional buyers of organic produce were cutting back, but regular buyers were lightening up on processed food in favour of organic whole fruits, vegetables and meats.

"They are trying to stretch their money but they are not willing to stop buying organic," he said. "We think in the long run the prognosis is good. The energy crisis and climate change can only really be addressed with organic production."

Wholefoods' Besancon argued consumers were treating organic purchases differently from those of other premium products.

"When you buy organic you believe it is inherently better for you and the planet," he said. "Who can afford to get sick? So people are becoming more introspective about what they eat. There is growth in the category. It is just less than it was."

GERMAN CARROT SHORTAGE
If the relative cost of healthcare is one significant factor keeping well-educated Americans with organic produce, in Germany producers argue organic foods are being helped out of a niche into the mainstream.

This compared with 14 percent growth booked in 2007.

Germany had a shortage of organic carrots in 2008 as major discounter Aldi suddenly introduced them into its product range, buying up most available supplies, Gerber said.

"Consumers want healthy food produced in an environmentally friendly and humane way," Gerber said. "They are not simply throwing this concept overboard because of the difficult economic times."

In France, the sector continued to grow last year and the head of "Agence Bio", the main organic food group gathering officials and producers, said she was confident it would continue to do so, albeit more slowly, in 2009.

"For the moment sales are keeping up, consumers are still interested and demand is rising," said Elisabeth Mercier.

Although official data will not be available until next month, she said her comments were based on wide and recent contacts with producers, specialist shops and supermarkets.

"In Europe, apart maybe from the U.K. where the market seems more fragile, I do not believe there will be a drop in consumption this year although growth rates may be less spectacular," Mercier said.

DEEP GREENS
In Britain, growth in sales of organic products has slowed dramatically, to an annual rate of about 2 percent from 16 percent, according to Nielsen data for the year to early November 2008.

"What I would expect is for this year to see a small single- digit decline for organics," said Jonathan Banks, U.K-based business insight director with Nielsen.

The challenge boils down to quality. "Organic producers must show their products taste better, are more nutritious and better for the environment. If they tick all those boxes they can sustain a (price) premium," he said.

In the London Whole Foods store, shopper Jonathan Daniels agreed. "Eventually, it has got to hit home. I think I'll cut back," he said, checking his mobile phone near the cheese display, a pack of green beans tucked under his arm.

"It all hinges on: 'Is organic all it's reputed to be? Is it really better for you?'"

Patrick Holden, director of Britain's leading organic certification body the Soil Association, said he was getting mixed reports, with some consumers switching from organic to cheaper free-range products.

Demand for many products is, however, holding up well: some are benefiting from growing demand for locally produced food.

"Organic food with a local story is bucking the recession," he said. "This recession has destabilised things a little, but not catastrophically."

Holden said about 20 percent of organic food sales were vulnerable, being bought by "light green" purchasers who had been influenced by the actions of other consumers.

These he contrasted with the "deep greens" -- who make up 80 percent of demand and are committed to the benefits for health and the environment.

"Storm and tempest won't affect their buying habits," he said. "I think that rump of committed consumers are with us to stay."