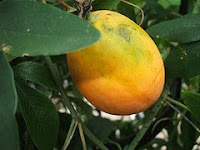 Asthma, or airway inflammation and mucus secretion, can cause wheezing, coughing, and dyspnea. According to the HerbClips article "Efficacy of Purple Passion Fruit Peel Extract in Alleviating Asthmatic Symptoms in Adults," about 17 million people in the U.S. have asthma, an increasing number, which has led to increased interest in the use of nutritional protocols to control asthma.

Purple passion fruit Passiflora edulis peel (PFP) has a history of use with health challenges. In South American folk medicine, extracts of the peel have been used with anxiety, insomnia, asthma, and bronchitis. The extract contains three antioxidants (cyanidin-3O-glucoside, quercetin-3O-glucoside, and edulilic acid) and was "shown to modulate nitric oxide in hypertensive rats."

These results show that passion fruit peel extract significantly improves asthmatic symptoms after four weeks of usage without adverse effects. The authors of the study concluded that: "PFP extract may be safely offered to asthmatic subjects as an alternative treatment option to reduce clinical symptoms."

When you type "passion fruit peel" into Google, several research articles and websites offering the product show in the results. This is not a specific recommendation for one product over another; rather, it may be best to talk it over with your primary care physician or to visit a natural health store and speak with their supplement specialist, who should be able to compare and contrast specific products for you.