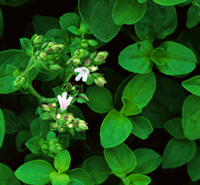 Common oregano, Origanum vulgare, "has long been used as a remedy for digestive, respiratory and rheumatic problems and as a treatment for stings and bites," according to the article "Natural Solutions to Drug-Resistant Infections," which appeared in the September/October 2009 edition of Well Being Journal.

Author CJ Puotinen provides a detailed list of recommended uses for Origanum vulgare based on the text The Cure Is in the Cupboard: How to Use Oregano for Better Health by Cass Ingram, who recommends both the dried herb and essential oil for: allergies, asthma, cold sores, colds, congestion, fatigue, flu, gastritis, parasites, tooth and gum infections, ulcers, and urinary infections, to name a few.

Regarding suggested use, Puotinen says Origanum vulgare can be made into a "water-based antiseptic solution." It can also be grow and dried for use in capsules or made into a tincture.

>> If you want to learn more about the use of essential oils to help support your body's optimal function, click here